After a thorough analysis of a number of masticating juicers, we found Omega J8006HDS as the most versatile one. Thankfully, it is not only versatile but also performing at the same pace in case of high juice yield. If you ever use any masticating juicer, you probably know that a juicer may not extract the juice at the same amount. For example, to extract juice from leafy vegetables like celery and to extract from fruits are not the same.

Ensuring the highest yielding from all types of food ingredients is a must. At the same time, one needs to look for better features, built-in construction, design, ease of cleaning and many more. Stay with us for a few moments in this article and we will make sure to let you know everything in this Omega J8006HDS Review

Omega J8006HDS has everything under the hood that a perfect masticating juicer required. It is quiet but it is powerful, it slow but it can provide huge juice yield. A consumer barely despairs on the performance of Omega J8006HDS.

We mainly focus on the versatile feature of it. Normally, many consumers blame their juicer after applying everything in their house for juicing. But with Omega J8006, you can grind and extract up to the maximum level with the help of a double auger 2HP motor with a powerful 200 volts.

Thankfully, Omega J8006HDS is versatile enough to deal with any juice ingredients. So, you can do any juicing stuff that you want, starting from fresh fruits, leafy veggies, grinding coffee, sorbet, mince herbs and lots more. Due to having a low RPM rate, it can notably minimize the oxidation as a result, the juice will remain fresh even after many hours of preparing. 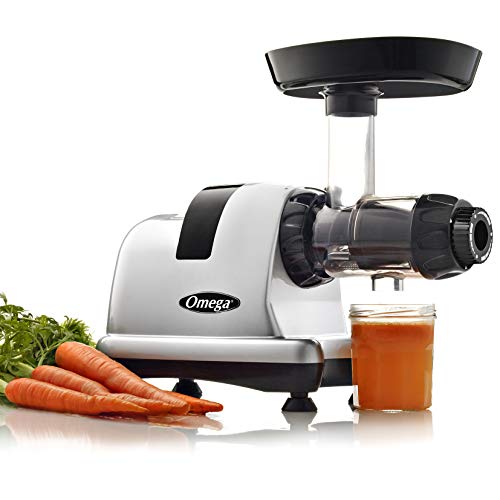 Why Should I buy Omega J8006 Masticating Juicer?

While buying any masticating juicer, one needs to sort out a few certain things. All masticating juicers can deal with the slow processing to some extent but there would be something more interesting feature you will find in Omega J8006. Let’s discuss it below:

Nowadays, you may observe a masticating juicer either have a very lower RPM or higher RPM. However, they are between 40 RPM to 110 RPM. But it is safe to be in just an accurate rate of RPM. After applying many ingredients, we found the 80 RPM rate is the most preferred one especially when you want to have everything under the hood.

As we mentioned earlier, having a dual-stage auger is an absolute win in the juicing game. Because it can turn the table anywhere you want and get more space to grind and extract ingredients. The single auger even do the same thing but, to be frank, it is less durable. With the help of a dual-stage auger, it processes the food in the most efficient way.

For example, while one auger is tired of then another can backup or both of them can run for grinding unyielding ingredients and bring results. That is an ace for Omega J8006. Last but not least, the main benefit of it relates to durability. Dual auger not only performing well but also is more durable and therefore, the company charge the consumers with a handful of investment.

Omega J8006 is not just a juicer alone rather it offers more. As we told you in the review that it can deal with whatever, you will bring to it. Starting from the grinding spices, coffee,

leafy veggies, and hard fruits like apples and carrots to the fresh juice, it can serve all of them. Moreover, it can keep all the healthy nutrients lowering down the oxidation.

Find out which is the Best Juicers for Celery in 2020

Omega J8006 keep calm and quiet while functioning. Even dealing with stubborn ingredients like wheatgrass or nuts, it will keep calm and quiet. All of us want a juicer that won’t disturb in the early morning juice preparation so it can fulfill that requirement, indeed.

The most interesting stuff with the Omega juicer is the versatility and multipurpose use of it. You can bring almost everything that is worthy to grind or extract and then see the result. When you want to feed your baby you can prepare baby food. When you have a visitor in your home you can make a cup of coffee. Besides, grinding spices, minced herbs, and garlic nut butter, all of this stubborn food processing is easy to handle with it. By the way, you will have the maximum juice yield from fresh fruits, that’s easy.

It can do it by dint of sophisticated dual-stage auger along with powerful 2 HP motor. This feature is especially for those juicers in which everyone tries to yield more juice and more food grinding at the same time.

How to prepare ingredients in the Omega J8006 Juicer?

Omega J8006 is a cold pressing high performing juicer so you don’t have to put a lot of effort into it. It is slow and steady and easy to use, whatever the ingredients you will toss into it. However, to prepare anything using this machine, you need to prepare the ingredients at first.

So before you are going to turn the switch on, make sure you have already prepared the ingredients. Afterward, see the ON switch which is located at the back. At the same place, you will find the off and reverse switches too.

Now, for instance, chop down your greens into one to two-inch sizes. While dealing with the hard veggies then make sure chop into quarters. Normally, it can easily deal with the apples, carrots and other hard ingredients within six to eight seconds.

Later on, when the processing comes to an end, you will find the plastic container is filled with pulp and another container filled with fresh juice. Depending on the number of food items or quantity, it takes moderate time like a few minutes to bring out fresh juices.

There is nothing special with the cleanup. First off, you need to make sure that the J8006 juicer is turned off when you will begin to clean it. Secondly, take the head off it, finally, dis-assemble all the detachable parts. Now don’t go with any hard cleaning stuff rather use soapy water, rinse four detachable parts. When you can see the cleaning up going fine then wipe gently using a soft dry cloth.

Instead of it, you can also use the dishwasherbut avoid the filter and it takes five minutes only.

After covering the Omega J8006 Review, we come to one point and a buyer should consider it. It is about versatile usage ensuring the highest durability due to having a double auger motor. When most of the juicer’s consumers unable to find a juicer that can juice like everything, the Omega J8006 is for them.

Difference Between Traditional Vs Masticating juicer?

A traditional juicer has more speed in cutting down fruit particles conversely, it can produce less juice yield. On the flip side, the masticating juicer has slow juice processing with lower Revolution Per Minute so it can produce more juice.

In a traditional juicer, it slices the food into many particles and due to the higher speed, the heat generation reaches the optimum level. This is avoidable to keep the food enzymes and nutrients intake.

Here, the masticating juicer nailed it. It has slow rpm speed while juice processing keeping the lower oxidation and providing the highest nutrients benefits. Therefore, the traditional juicer kicked out from the market by dint of masticating juicer benefits.

Masticating juicer works slowly but just as perfectly keeping the highest juice yield and lowest oxidation. This is why it is the best juicer type in the world. Normally, it comes with a single or dual-stage auger which has either 2 HP or 3 HP motor. Normally, a single motor is limited to extracting a few numbers of food ingredients and less powerful. On the flip side, the dual auger has more grinding power. However, the single auger has the same masticating benefits compared to the dual auger.

The main attention of any masticating performance is with the Revolution Per Minute. The more RPM the less juice yield and other health benefits. To keep this in mind, an ideal masticating juicer always has an RPM rate between 45 to 100. When you will toss something into the juicer then it will crush the stuff slowly and efficiently and bring out as much juice as it could be. As a result, you will see less dry pulp come out into the pulp container but more fresh juice in the juice container. That is the real fun of it.

Masticating juicer is far better than any other traditional juicer. It is better due to having a single or dual-stage powerful auger, however, it slowly but efficiently breaking down the fibers and brings out maximum juice yield and nutrition.

Where is the Omega juicer made?

All the Omega juicer made by S. Korea

Yes, it is absolutely BPA free.

“As an Amazon Associate, I earn from qualifying purchases.”

Post may contain affiliate links. If you click on a link and buy anything, I get some money at no extra cost to you. It helps me run this blog smoothly. Thank you.

Scroll back to top